AccuRounds is acknowledging a long standing employee, Ricky Carr, for his 45th anniversary with the company. Ricky has been with AccuRounds since 1976 and is a Canton resident. He worked for B&F Swiss, a machine shop in Canton, MA, when the company was purchased by Len Tamasi.

Tamasi changed the name of the company to AccuRounds and relocated it to Avon, MA. Through the years, Ricky has had a number of responsibilities including operating secondary machines, tumbling and deburring, burnishing,and general maintenance.  He is currently is a Recycling Specialist. Having such a long tenure with one employer is not typical nowadays. A celebration was held in Ricky’s honor.

His coworkers enjoy seeing Ricky around the plant. One coworker even learned sign language so she could communicate with him. “Ricky’s dedication and commitment to the company have been unwavering, and he takes great pride in his work,” said Michael Tamasi, President and CEO. “We are lucky to have him!” 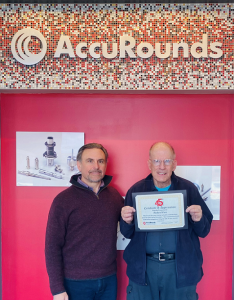 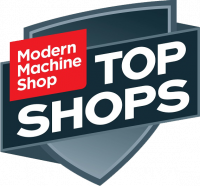